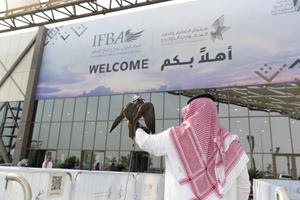 The International Saudi Falcons and Hunting Exhibition 2022, has been welcoming visitors and exhibitors from over 30 participating countries with visitation expected to top 500,000 over the course of the event

RIYADH, Saudi Arabia, Aug. 30, 2022 (GLOBE NEWSWIRE) — Falcon experts from breeding farms around the world have been singing the praises of this year’s International Saudi Falcons and Hunting Exhibition just two days into the event.

Now in its fourth year, the exhibition is larger than ever with visitation expected to top 500,000 over the course of the event, which runs from 25th August – 3rd September. Over 350 exhibitors are in attendance and many have shared their delight at the impact the exhibition is having on the industry.

Held at the Saudi Falcons Club HQ at Malham, attendees are greeted by the vast auditorium packed with falconry stalls, memorabilia, technology, equipment, photographs and items detailing the rich history of falconry in Saudi Arabia, including a huge stand showing the important work the Saudi Falcons Club does to promote the art of falconry and also the conservation of birds of prey. Namely with its Hadad project that helps the conservation of both two migratory falcons – the Saker falcon and the Peregrine falcon, along with the two resident birds, the Barbary falcon and the Lanner falcon.

International falcon breeders have been showcasing their stunning birds, with farms being represented from around the world. Numerous breeders from Europe include the UK’s Fox and Desert falcons, France’s SB Falcons and Hura Falcons from Belgium. From further afield, Sullivan Mews are attending from USA while more locally Gulf Falcons are in attendance from Bahrain.

French Breeder Philippe Hertel from SB Falcons said: “It’s my second participation at the exhibition and we are very proud and happy to have our farm here. For us it’s very important to be a part of the event as the business in Saudi Arabia there is a lot of falconers so of course we should be here to present our birds. We specialize in racing and so we have very fast falcons, we have had some winners in the past, so it’s important for the people here to see what we have to offer. The organization of the event is very good, from the shipping to the accommodation etc. It’s the best in the world compared to other events.”

German Breeder Ulf Voss from Voss Falcons said: “It’s the first time we are here, we are very happy to have been invited! We have 38 falcons with a great racing and hunting history. We try to bring the best racing falcons while making some great contacts for the future. We hope to increase our business with Saudi Arabia and so we are here getting our brand name out there to the people within the industry, it’s the most important thing for us right now. Saudi Arabia is the place to be for falconry at the moment and so it’s a really interesting market right now.”

Belgian Breeder Giel Van Haecke from Hura Falcons said: “It is very well organized, and it’s a great place for people to gather, connect and meet. You can’t get any better for the breeder, it’s a great place to sell birds and you need an event like this to make your name. Everyone is very friendly and there is a lot of different birds this year and when you breed quality there is no problem.”

The exhibition has a special section dedicated solely to the history of falconry both in Saudi Arabia and around the world. This area is full of interactive exhibits in place to educate and inspire the next generation of falconers in the Middle East. Other areas include an art gallery, featuring Saudi artist Hila Alhmod who is displaying a stunning Peregrine falcon, which has been created by pyrography. There is also an impressive auction hall for the daily falcon auctions. Education is a huge theme this year and experts are giving daily talks on the art of falconry, and there’s a big emphasis on encouraging the next generation of falconers through motivational speaking and children’s learning areas.

Now in its fourth year, the International Saudi Falcons and Hunting Exhibition 2022, has been welcoming visitors and exhibitors from over 30 participating countries, making it the biggest edition of the event thus far. The event, taking place in Riyadh, runs until 3rd September 2022.

A photo accompanying this announcement is available at https://www.globenewswire.com/NewsRoom/AttachmentNg/0eaefc2d-f957-43a0-94c1-8429d510453f